The documentary film Down Wind airs tonight at 8 PM EDT on the Sun News network.
Here is a column from journalist Jerry Agar on the film. 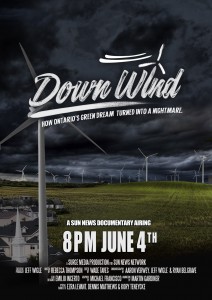 JERRY AGAR | SUN NEWS NETWORK June 3, 2014
It is heart wrenching to see and feel the pain of fellow Ontarians breaking down in tears as they explain how the Liberal government drove them from their homes.
But to understand how cold and callous our current political leadership is in this province, you need to experience it.
Rebecca Thompson’s documentary, Down Wind: How Ontario’s Green Dream Turned into a Nightmare (Surge Media Productions), airs on Sun News Wednesday at 8 p.m. and 11 p.m.
It is a story of reckless, agenda-driven politics resulting in shattered lives.
The Ontario Liberal government’s Green Energy Act isn’t just an economic failure; it is an act of brutal indifference to the human cost of politics.
A cost ignored by people living far from the thump of the giant wind turbines, secure in their downtown Toronto homes and politically correct theories; a safe distance from places like Ripley, Clear Creek and Lucknow, Ontario.
Many may not care – worshiping as they do at the altar of so-called green energy – that the jobs promised by the Liberals through their Green Energy Act were never delivered, while the cost of hydro skyrocketed.
But the human cost should matter to us all.
Giant wind turbines, as high as 50 storeys, with blades the size of a 747, were foisted on communities in rural Ontario with no consultation or agreement from the residents, their municipal governments having been stripped of their planning powers by the Green Energy Act.
Unlike politicians who pay lip service to “serving others” while stomping all over people’s lives and looking after themselves, Norma Schmidt spent her life in Underwood, Ontario in the actual service of others as a nurse and instructor of future nurses.
She and her husband spent their lives in the home they lovingly restored over the years; a place they had hoped to share with their grandchildren.
But Norma has been forced out of her home by severe migraines and depression, brought on by the relentless noise and vibration from the industrial wind turbines erected practically in her back yard.
She left both the job and the home she loved, escaping to a room in her daughter’s house.
It is not the life she worked all these years to achieve, and it is not what she deserves.
Do Norma’s tears, and those of others similarly affected, fall to no effect at the feet of Premier Kathleen Wynne?
Norma’s story is one among many, some of them told in Down Wind.
This is the same Dalton McGuinty/Wynne Liberal government that used public money to reward violent aboriginal protesters who seized private property and terrorized people in Caledonia.
That “occupation” continues today and the government, knowing that their voting base in Toronto couldn’t care less about some rubes in the country, keeps the issue quiet by caving into thugs, rather than protecting law-abiding citizens.
Would the government be as forgiving to people across rural Ontario if some were to blow up a few of the industrial wind turbines that have made their lives hell? Of course not.
There are no turbines thumping the night away in Don Valley West or Toronto-Centre.
It remains to be seen whether the people in such ridings, who overwhelmingly voted Liberal in 2011, will care more for their fellow citizens in rural Ontario this time around.
There are any number of political parties to support other than the Liberals.

Citizens to file appeal vs wind ...