To Premier Wynne: No means NO on wind farms 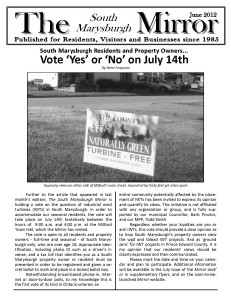 From The South Marysburgh Mirror, August 2014:

Two years ago on July 14th, 2012, in a secret ballot referendum sponsored by The Mirror, the citizens of South Marysburgh were asked the following question:
“Do you want industrial wind turbines installed in South Marysburgh like the ones proposed by wpd Canada and Gilead Power for their projects near Milford and on the south shore?”
90.2% voted “No”. Those referendum results were widely publicized.
Now, over 2 years later, neither the wind developers nor the Ontario government have shown any signs of complying with the wishes of the people who still live peaceably in the neighbourhoods where developers are planning wind factories. Instead, the Ontario government and the developers continue to fight against South Marysburgh citizens, both in court and with bureaucratic processes.
To the citizens of South Marysburgh, “No” means “No”. We will not give up this fight.
Jim McPherson, Milford

Can renewables save the economy? History ...

Wind power: not there when you ...