Setback issue to be argued Sept. 3

The Environmental Review Tribunal has ruled that only issues related to an amendment to the HAF Wind Energy Project will be heard next month. The majority of the issues raised in West Lincoln resident Anne Fairfeild’s appeal will not be argued.
Grimsby Lincoln News
By Amanda Moore

WEST LINCOLN — The case against the five industrial wind turbines already spinning in West Lincoln is “still partially alive.”
Anne Fairfield, who appealed the province’s approval of the HAF Wind Energy Project, appeared before the Environmental Review Tribunal for a preliminary hearing last week. All of the issues raised in her original appeal were quashed, meaning only those mentioned in her appeal to the province’s subsequent approval of an amendment to the project will be heard at a hearing next month.
“They knocked out everything not mentioned in the amendment,” said Fairfield. “All we’re left with are property lines and the withdrawing of post construction raptor monitoring.”
Project proponents Rankin Wind Energy and Vineland Power Inc. had to submit an amendment to their application after it came to light that four of the five turbines were built closer to property lines than regulations allow.
According to the Green Energy Act, turbines must be located a minimum of a blade length from the nearest property — in this case, 95 metres.
The province approved the amended application June 20. Fairfield filed her appeal July 3.
Come Sept. 3 Fairfield will only be able to argue on the issue of property line setback infractions and post-construction raptor monitoring. The West Lincoln resident will no longer be able to present on issues of health, gas wells. hazardous waste and the impact on Charter rights — the issues Fairfield raised in her original appeal to the project’s approval.
Fairfield and members of the West Lincoln Glanbrook WInd Action Group met with Niagara West-Glanbrook MPP Tim Hudak Monday to discuss the upcoming tribunal. 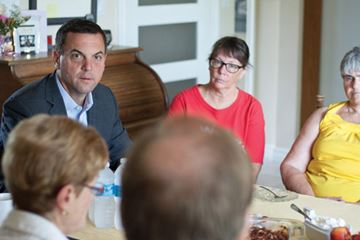 West Lincoln-Glanbrook MPP Tim Hudak meets with constituents in resident’s home
Hudak was vocal in his opposition to the Green Energy Act in his time as PC Party Leader. He raised the issue several times at Queen’s Park on behalf of his constituents in West Lincoln and the province at large, calling for a complete moratorium on more than one occasion. He has called on the Minister of Energy, Bob Chiarelli, twice now to “do the right thing” in the case of the HAF project.
“If you had been caught speeding on Twenty Road, you wouldn’t get a redo,” said Hudak, speaking on the province’s approval of the amended application.
“It only makes sense for the government to follow its own laws.”
Hudak, fresh on the heels of his loss to Kathleen Wynne in the race to become premier, said he would do what he can to help his constituents but realizes his influence is not as strong as it could have been had the outcome had been different in June.
“My goal was to win the election and stop this thing in its tracks,” said Hudak. “I’ve met with Wynne and McGuinty, face to face like we are now, to say this is a bad idea for the province as a whole.”
Fairfield asked if the PC party would continue to push against the Liberal’s green agenda without Hudak at helm. Hudak said he appointed Lisa Thompson to the post of energy critic because her own riding of Huron-Bruce was home to several turbine projects. He was confident the party would continue to push against “one of the most destructive policy decisions in recent history.”
Hudak, like the half dozen residents gathered at Veldman’s house, did not have the same level of confidence the Environmental Review Tribunal would side with Fairfield.
“It’s an incredibly stacked deck,” said Hudak.
“ERTs don’t work,” said Fairfield, noting ultimately the decision will lie in either appeals court or in a judicial review, both of which she is prepared to more forward with.
…

Read the full story here.
Editor’s Note: the Environmental Review Tribunal Panel is NOT made up of “judges” but rather lawyers who are civil servants, employed by the Province of Ontario.

Residents, municipality fed up with MOECC ...