Global News July 3, 2015
CALGARY – John Campbell has worked with falcons, eagles and hawks in the wild for decades, all over Western Canada.
He has monitored nests near Pincher Creek since the 1970s, and banded thousands of baby raptors, long before the area became the birthplace of wind power in Canada.
Campbell has been finding more and more empty nests in the area.

“Currently there are 10 sites that could be occupied; only five are producing young right now,” Campbell said.

In Alberta, several species of raptors are considered sensitive, or at risk.
The birds aren’t dying from turbine strikes, Campbell said.
They are abandoning high-quality nests because of the pressure of turbine development.
Wind turbines mess up the birds’ lives, much in the same way drivers would be stressed if a busy freeway suddenly closed.
The raptors move to lower quality sites, where fewer chicks survive.
Watch [here]: John Campbell has single-handedly banded thousands of falcons, hawks and eagles across Alberta. Global’s Mia Sosiak and photographer Bruce Aalhus recently tagged along for a peek at his work on July 2. 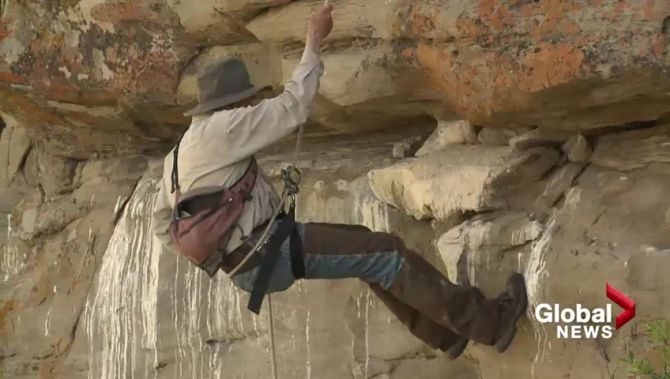 The wind energy industry said it’s working hard to prevent that.
“There’s extensive upfront work — two years of monitoring where raptor nests are,” said Tim Weis, director of policy for the Canadian Wind Energy Association. “The wind farms are planned around those areas.”
Companies must allow for large setbacks from nests in order to receive regulatory approval for wind farms.
If there is an impact on a nest site that no one expected, Alberta Environment has the power to force companies to make changes after the fact.
But Campbell says the problem is compounded by other nearby developments.
A communications tower built during breeding season and new housing above a nest site have also driven birds away from the area.
“It’s just development done badly,” he said.
Campbell insists he is not anti-development, and some nest sites in the area remain successful, where neighbouring wind farms were properly planned.
“What also horrifies me is they’re going to double the number of developments,” he said.
There are 292 turbines now in the M.D. of Pincher Creek, with 180 more approved and on the way.
The raptor expert, who received the province’s highest conservation award this year, is now asking hard questions of Alberta Environment.
He wants to know who is looking at the cumulative effect of wind power generation on raptors in the Pincher Creek area, and who should be. Perhaps the most difficult question is, “How much is too much?”
It’s something Alberta Environment and Parks can’t answer at this time.
“It’s something we’re working with industry to look at,” said Brandy Downey, senior species-at-risk biologist with the provincial government.
“Right now there is no research to say what is too much and what is too little; that decision hasn’t been made,” Downey added.
There are also no studies underway to understand the cumulative effect of turbines on birds of prey, just monitoring of individual projects on a one-off basis.
“I think it’s short-sighted and I’m hoping that the (new NDP) government will have a look at that,” Campbell said.
He hopes it’s possible to strike the right balance between wind energy development and the birds that also call the area home.
© Shaw Media, 2015

Truth about wind power in Ontario

What the K2 documents mean