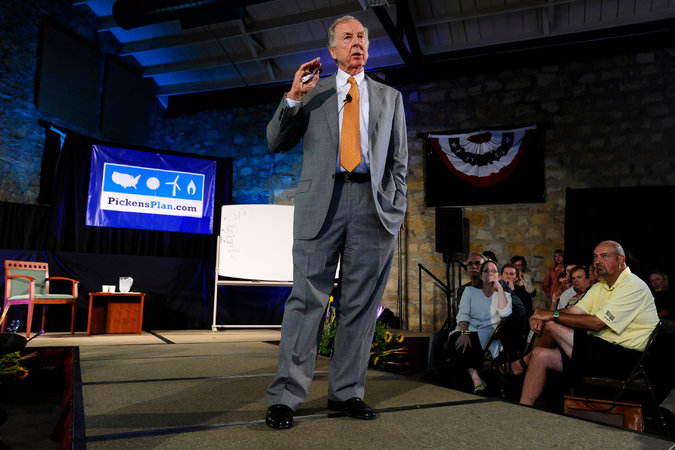 T. Boone Pickens speaking about energy at a town-hall meeting in 2008. The oil and gas tycoon has brought a claim against Ontario for $700 million in damages related to bids that his wind power company, Mesa Power, lost in wind power auctions. CreditLarry W. Smith/Getty Images
New York Times, October 15, 2015

T. Boone Pickens made billions drilling for oil and gas and squaring off in bare-knuckled corporate takeover bouts.

Now the 87-year-old tycoon is embroiled in what may be the last big battle of his career. Only this one is aimed thousands of miles north of his Texas home. And it is over wind power.

It is an unusual fight for the former wildcatter. Mr. Pickens is using his rights under the North American Free Trade Agreement to bring claims against the Canadian province of Ontario. And a Florida company that has provoked his ire is one that is usually on the same side as Mr. Pickens when it comes to regulation and politics — in particular, in helping Jeb Bush get elected president.

Like other investors who have challenged governments, Mr. Pickens has taken his dispute to an international court. He is seeking $700 million in damages for future losses related to bids that his wind power company, Mesa Power, lost in wind power auctions in Ontario.

Mr. Pickens and Mesa Power contend that the Florida company, NextEra, was granted exclusive access through private meetings with important government officials that ultimately tilted the bidding in its favor.