Wind farm to be ‘fatal’ to Collingwood airport study shows

Wind project would be ‘fatal’ to Collingwood Regional Airport: study 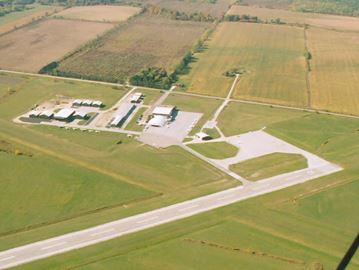 The location of wind turbines in close proximity to the Collingwood Regional Airport would be “fatal” to the facility, according to an economic impact study.

The report, prepared by Malone Givens Parson at the behest of Clearview Township and the Town of Collingwood as part of their case against the turbines proposed by WPD Canada, determined the turbines would have a “significant negative impact on the operations” of the local airport.

The study is part of the two municipalities’ submission to the Minister of Environment and Climate Change and is intended to provide a thorough look at the potential economic impacts of the wpd Turbine Project, including the perception of the economic viability of the future of the airport for those looking to invest in the airport. The document was submitted to the ministry on Jan. 8, and released publicly on Monday.

“We conclude that the Collingwood Regional Airport is fulfilling its intended function as an economic engine and is attracting business expansion proposals that would deliver very substantial economic benefit to the South Georgian Bay region” Malone Givens Parson principal John Genest wrote in the letter to preamble the executive summary of the 190-page report. “Approval of the current wpd turbine project would be fatal to business expansion, such that, on balance, the offending turbines should be moved or wpd’s Renewable Energy Act Application denied.”

In the report, the consultants note the location of five turbines would “intrude, in several cases significantly, into the operating space” of the airport. While those ‘intrusions’ could be addressed to NAV Canada’s satisfaction by changes to operating procedures for pilots landing and taking off from the facility, the proposed changes “are expected to have consequences that are not reviewed as part of NAV Canada’s mandate, and were therefore not examined by that agency,” the consultant wrote.

The proposed turbine locations would have significant impact to the airport’s operating procedures that would significantly impair the airport’s attractiveness to the ongoing flight school, or any future aviation business operations, the report concluded.

“These impacts could be resolved by relocating the turbines to positions outside the airport’s air space, or by denying the wpd turbine project application,” the consultants stated. “The wpd turbine project, in its current configuration, risks the loss to the region of significant new investment in growing the regional economy and labour skillset.”

The consultants estimated the economic benefits of business expansion at the airport, which would notably include the Clearview Aviation Business Park, would create nearly 1,900 direct and indirect jobs, about $10.5 million in tax revenue and have a $152.6-million impact on the region.

The consultant’s report is particularly damning of a similar study submitted to the ministry last November by WPD Canada, noting it was of narrow scope and “narrowly executed by an author with no evident expertise or experience in economic impact analysis or economic development.

“It misses the single most important element in assessing the potential consequences of implementing the wpd turbine project – market and investor perceptions of the attractiveness of the facility as one enabling successful investment of risk capital, and its influence on current or prospective plans to invest.”

For the ministry to approve WPD’s renewable energy approval application in its current form, “would put a narrow and relatively small private interest ahead of the greater public interest in unimpeded operations at the [airport], and the future investment, job growth and related economic benefits the Airport could sustain in furtherance of local, regional, provincial and federal economic development objectives.”

WPD has acknowledged Simcoe.com’s request for comment, but has not yet responded to the comments in the report.

Annoyance not a “disease” power developer ...