“A waste of time and money”
The Guardian, March 22, 2016
An Australian research council has given two grants worth $3.3m to research the impact of wind turbines on human health despite concluding last year there was no evidence turbine noise was harmful.
Prof Anne Kelso, the chief executive of the National Health and Medical Research Council, said it had made the grants because “existing research in this area is of poor quality and targeted funding is warranted to support high-quality, independent research on this issue”. 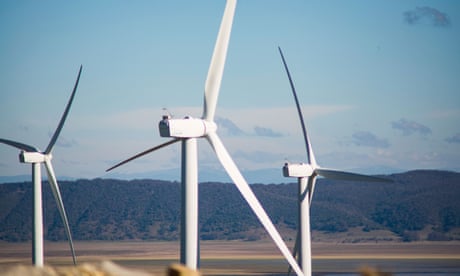 The council will give $1.94m to the University of New South Wales professor Guy Marks to measure the effect of infrasound on sleep quality, balance, mood and cardiovascular health.

A Flinders University associate professor, Peter Catcheside, will get $1.36m for a study that will compare wind farm noise to traffic noise to determine if low-frequency sound from wind farms could potentially disturb sleep through chronic sleep disruption or insomnia.
In February 2015 the National Health and Medical Research Council concluded there was “currently no consistent evidence that wind farms cause adverse health effects in humans”.
But it noted “the character of the emissions and individual perceptions of them are highly variable”.
“Given the poor quality of current direct evidence and the concern expressed by some members of the community, high-quality research into possible health effects of wind farms, particularly within 1,500 metres, is warranted,” it said.
The council then made a targeted call for research into wind farm noise and human health.
Kelso said: “These grants directly support the Australian government’s commitment to determine any actual or potential effects of wind farms.”
The Australian Wind Alliance’s national co-ordinator, Andrew Bray, said the grants were a waste of time and limited research funding.
Bray said: “The NHMRC’s own review failed to find reliable evidence that wind farms have a negative impact on health.

Literally hundreds of thousands of wind turbines operate around the world with almost no complaints. Many of these turbines are much closer to residents than is allowed in Australia.”

Bray said exhaustive international studies had also failed to find links between health and wind farms, including a $2.1m study by Health Canada that studied 1,200 households and measured 4,000 hours of wind turbine noise to calculate indoor and outdoor noise levels at different homes in the study.
The Australian Solar Council CEO, John Grimes, said claims of negative health impacts from wind turbines were “the worst pseudo science nonsense” and had been “completely discredited by reputable medical bodies here and around the world”.
Read the full story here.

Proposed wind farm area should be ...