Wind power in Ontario’s North: environment and economy at risk


February 21, 2017
The municipalities of rural Southern Ontario have soundly opposed and stalled the attempt of the government to initiate a new round of Request for Proposals for Large Renewable Procurements. This opposition has been based primarily on the harm wind turbines create for human health.
The Northern Ontario objection to wind-generated electricity is quite different from that of the South. The health of the Northern economy is the primary opposition issue to wind turbine developments. The Northern economy, which once relied on its primary resource-based industries, is currently facing an economic decline in those industries. This is in part due to the high cost of energy which has forced the closure of many sawmills, pulp and paper mills and fibreboard mills. Northerners are currently examining the potential for developing an expanded eco-tourism based economy. The Northern view is that its future prosperity can be restored utilizing the inherent values offered through its last remaining asset, an uncompromised wild landscape and natural environment.
Despite regional differences, Southern Ontario and Northern Ontario are both strongly opposed to the generation of energy by industrial wind installations. However, unlike the South, Northern Ontario’s low population provides no voting power to impact government decisions. Much of rural Northern Ontario is unincorporated and has no official municipal voice to object. This requires support for the North from those in the Southern regions as opposition is only stronger with a unified approach.
Here’s why Requests For Proposals in the North should also be stalled.

As the photographs in this article reveal, the Lake Superior Basin is a national treasure which all Canadians and visitors to Canada have the right to enjoy in its natural state.

The people of Ontario have as a common goal the protection, conservation and restoration of the natural environment for the benefit of present and future generations (Environmental Bill of Rights, 1993).

The natural unspoiled state of the shores and coastal highlands of the Lake Superior Basin is the legacy we leave for the benefit of tomorrow. 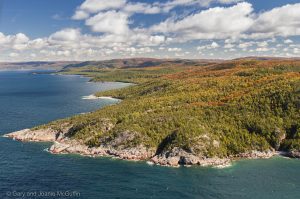 The authors of this article are members of the Save Ontario’s Algoma Region (SOAR) Writing Team.
*SOAR is a member of Wind Concerns Ontario.

No appeal in Ostrander Point wind ...