This past spring, Wind Concerns Ontario conducted an analysis of Ministry of the Environment and Climate Change (MOECC) response to reports of excessive noise and vibration(MOECC) and concluded the process for responding to citizen complaints is deeply flawed and largely ineffective. Global News ran a two-part investigative report on this information, which featured Ontario families who have been complaining about turbine noise for years, with no resolution.
More documents recently released under Freedom of Information (FOI) and correspondence with Ministry staff reveal problems with the Cornwall office that are further examples of a poor strategy for response. The documents and email also are a clear indication that the MOECC has completely abdicated its role as a regulator, and leaves resolution of any problems up to corporate wind power developers.
The Cornwall office up to now has only had to deal with any reports of excessive noise stemming from the 30-megawatt South Branch power project in and around Brinston, Ontario. Documents show that noise complaints were made even before the project began commercial operation in March, 2014.

No report number means no records?

Our initial request for information resulted in three records, which did not match Wind Concerns Ontario members’ experiences with this power project. It turned out, the Cornwall office had not been giving Incident Report numbers to people reporting, as is procedure, so their complaints were not recorded or tracked. On the advice of insider, we re-filed a request, this time asking for “investigative” reports and a handful — again, at odds with our members’ real-life experiences–was turned over.
In the records was an email from the Senior Environmental Officer to the power developer EDP Renewables, in which the MOECC staff member actually apologizes for passing along a complaint. [Emphasis ours]

I received a noise complaint last week –not specific to any particular time last week, but a complaint of noise when the winds are from the west or south west. The resident lives [redacted] and is bothered by the noise from the turbine [redacted] The caller stated he cannot open his winds when the winds are from that particular direction due to the noise. …

Do you have any acoustic results for that specific turbine yet?

Excerpts from other complaints

May, 2014: There have been several nights when I am awakened with the window closed. I shudder to think of having the windows open all the time now …

And, in one actual Incident Report:

June, 2014 IR 5006-9KYK5D: ..caller report last night was the 7th night since start-up of wind turbines as SBWF that she has been unable to sleep for the noise …Noise is described as drone of an airplane — very loud with windows closed.

MOECC noted: “acoustic monitoring conducted by tech support July 14-18 2014, report under review with noise engineer”
This summer, a Brinston area resident wrote to Minister Murray about the complete lack of response to her reports of excessive noise (she has had to sleep in her basement on occasion because of the noise and vibration), and an officer with the Cornwall Office telephoned her.
Here’s what she was told.

*They still don’t really know what to do.

*They “lost” her records — even though she had so many reports that the MOECC actually installed equipment and did noise measurement for several days.

*Last, it was too bad they lost everything pertaining to her situation and reports but it didn’t really matter, she was told because “You’re the only one complaining.”

“Lost” records? Citizen complaints under the regulations “don’t matter”? And she was “the only one”, which is completely false?

Outrageous behavior for a regulator

Wind Concerns Ontario wrote a letter to new MOECC Minister Ballard, stating “This is outrageous treatment of a citizen of Ontario, who is simply following the process communicated to her by both the Government of Ontario and the wind power developer, who is mandated under its Renewable Energy Approval to act on and resolve any complaints of excessive noise.”
Moreover, WCO noted in its letter to the Minister, the Cornwall office is not ensuring compliance to conditions of the Renewable Energy Approval, specifically results of the compliance audit, which must be posted on the wind power project website, but are not. The response from the Cornwall Office (August 10, 2017):

“Copies of the acoustic audits can be obtained from the Ministry of Environment and Climate Change through a Freedom of Information (FOI) request.  I haven’t had a chance to check, but some reports have been included in the SBWF website– I assume you’ve already checked there.  Let me know if you are interested in pursuing an FOI request and I’ll direct you to the form and process.”

When WCO responded that the report is supposed to be public as per the protocol released by the MOECC in April 2017, the Senior Environmental Officer replies [emphasis ours] on August 10, 2017:

“Ah…I haven’t had a chance to review this new protocol in its entirety…there are some changes worth noting.  Thank you for bringing my attention to this.  I will be requiring the SBWF to post their reports on their website.  I’ll keep you apprised.

“This is completely inappropriate behaviour for a regulator,” WCO president Jane Wilson wrote to Minister Ballard.
“The people of this particular area are now facing approval of a 100-megawatt power project by the same developer, this one close to TWO communities,*  and they have no assurance whatsoever that the Cornwall District Office is prepared, or even competent, to respond effectively to noise complaints.
“On behalf of our members, we ask that you investigate this situation. Government staff should be prepared to fulfill the department’s mandate, and carry out their responsibilities to the people of Ontario.”
As of September 4, 2017, the mandated compliance report is still not on the South Branch Wind Farm website.

We have just been informed by the MOECC that the EDP documents have been reviewed and found to be incomplete and cannot be posted at this time.
This project has been in operation for three years. 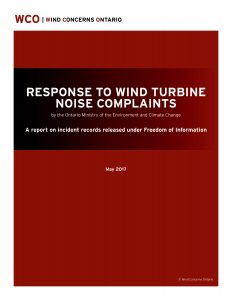 *EDPR is about to file documents for Renewable Energy Approval for the 100-megawatt Nation Rise wind power project, which will be close to the communities of Finch, Berwick and Crysler

Amherst Island groundwater could be affected ...