When demand for electricity and heating were at their highest, wind and solar production were at their lowest
–Stephen Aplin, Canadian Energy Issues

Ottawa-based energy analyst Stephen Aplin has taken on a portion of the work the Ontario government never did: an analysis of the benefits of wind power as part of Ontario’s power mix.
This week, with temperatures well below normal, is wind power achieving the promises made for it as a cheap reliable source of power?
No, says Aplin, in a comment on his Canadian Energy Issues website. “Bearing in mind the data presented [in his recent article], the answer is an obvious and emphatic, NO.”
Even if Ontario had ten times the capacity of wind and solar it does now, it still wouldn’t meet demand.
And before the pro-wind people jump up and say, We need MORE, Aplin says, that’s just  the usual from the pro-renewable energy salespeople — ” buy more of my inferior product.” 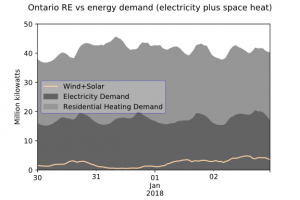 Aplin concludes by despairing of the renewables myth.
“In light of this, another monster-size question is begged. Why do governments all across the world regularly and routinely regurgitate the 100 percent renewables myth?
And why do the media types who interview the government types who regurgitate this nonsense not call them on it?”
Read the article here.

Doctors in Germany call for halt ...

Public in the dark on Kawartha ...