May 8, 2018
The Ontario government announced late in the day last Friday it had given Renewable Energy Approval (REA) to the 100-megawatt “Nation Rise” wind power project, proposed by Portugal-based EDP Renewables.
The project is proposed for North Stormont, between Ottawa and Cornwall.
Many comments were received by the government during the comment period for the power project, many of which related to the unusual geology of the area.
In fact, according to a map of the project, almost every single wind turbine will be located over what is designated as “vulnerable aquifer.”
Ontario has already seen the results of wind turbine construction over fragile hydrogeology (though denied by the government), in Chatham-Kent where water wells have been disturbed such that at least 20 families do not now have water from their own wells. Several parties are now calling for a public health investigation. 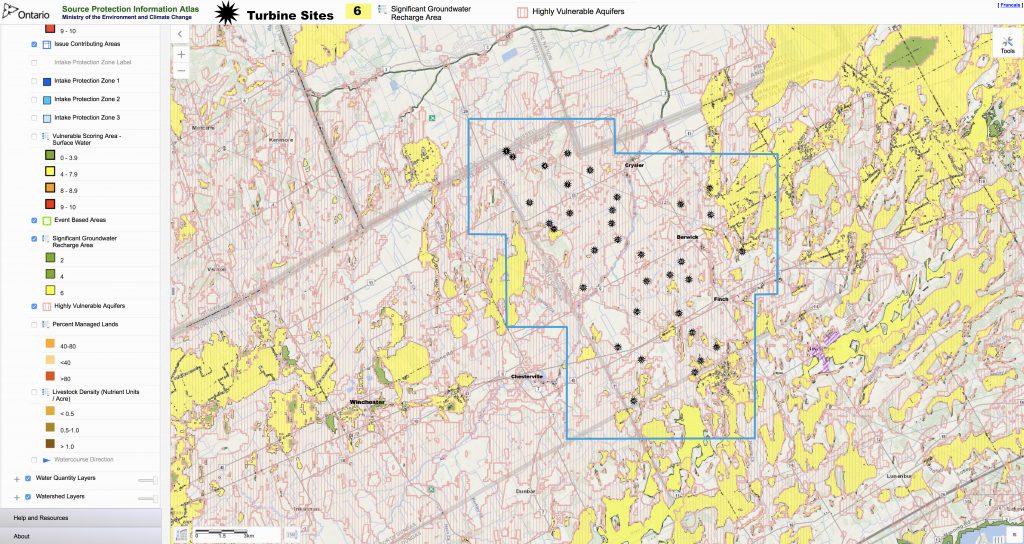 Nation Rise map: the fine pink striped area is all “vulnerable”
In the case of the Nation Rise project, the ministry responded in the notice (emphasis is ours):

Impacts to groundwater
Concerns were raised that ground-borne vibration generated during construction (pile-driving) and operation of turbines (blade rotation) may impact well water quality. These concerns were based on allegations and complaints that ground-borne vibration generated during pile driving and blade rotation of wind turbines in another area of the province has impacted well water quality. Concerns were also raised regarding the potential for other project-related activities to contaminate groundwater.

Geological/geotechnical concerns and impacts as a result of natural hazards
Concerns were received regarding the viability of installing the project within leda clays and the potential impacts of the project as a result of natural hazards, such as landslides and earthquakes. Concerns were also received regarding the potential for the project to facilitate the development of a landslide.

To ensure that the project will be safely constructed in this geological setting, as a condition of the REA the proponent will not be permitted to commence construction of turbine foundations and access roads until a detailed geotechnical report has been submitted to and approved in writing by the MOECC.
One would think that, given the seriousness of these concerns, and irreversibility of any damage to the aquifer, the Ministry would have required these reports before issuing an approval.
Residents have other concerns including effects of being exposed from the noise emissions from that many wind turbines which will also be among the most powerful in the province. That concern is magnified by the fact that this new wind power project did not have to abide by Ontario’s newest set of rules for wind power generators, but was able to opt for the less strict, older guidelines. It is possible that many turbines will be out of compliance with new regulations the minute they begin operation.
If the project goes ahead.
The community is now pondering next steps, which could include an appeal of the approval.
For more information, contact Concerned Citizens of North Stormont : http://concernedcitizensofnorthstormont.ca/
or Wind Concerns Ontario at contact@windconcernsontario.ca
#MOECC