Some fights against industrial wind projects are over, but there is more work to be done 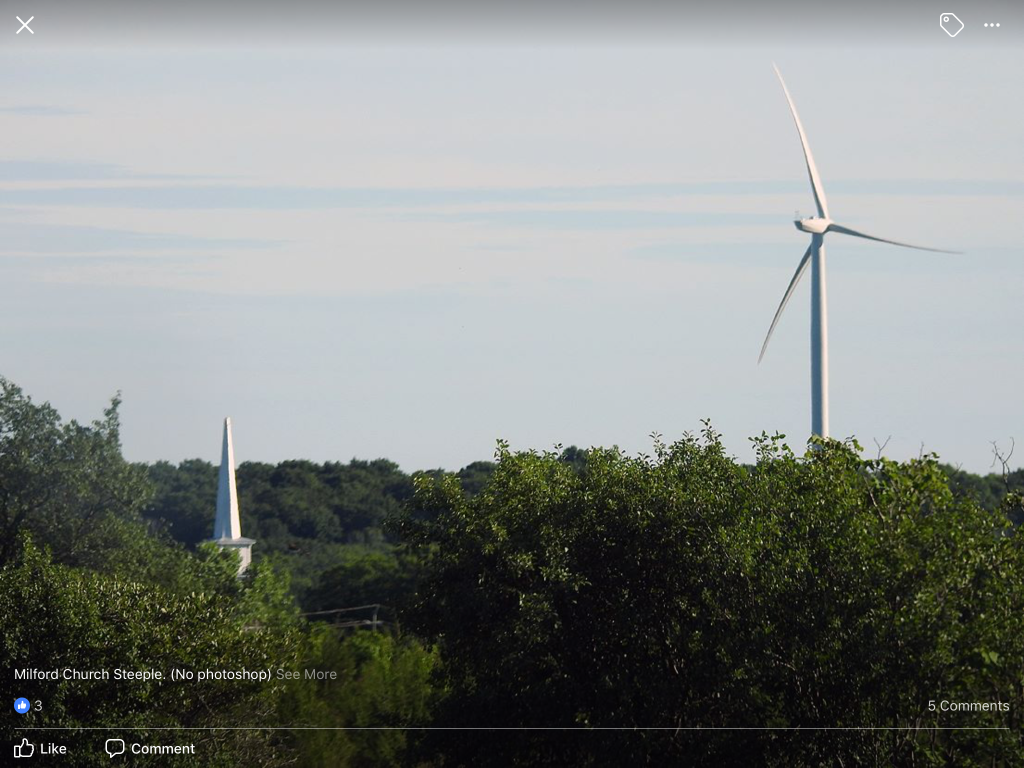 The turbine built near historic Milford in Prince Edward County; citizens celebrated in the Milford hall yesterday.
October 1, 2018
After years of fighting one industrial-scale wind power project after another, after the Ostrander Point project was cancelled, and after the huge “White Pines” project was cancelled by the new government, the people of Prince Edward County finally got together yesterday for a celebration. It was a simple affair: a potluck supper in a community hall, a modest gathering of people from all over the expansive county, united in a single cause — to prevent the industrialization of a fragile environment, harm to the environment, and serious impacts on people.
As one of the founding communities that are part of the 30-plus-strong coalition that is Wind Concerns Ontario, the people in Prince Edward County have been, in many ways, a beacon of hope for others. They suffered defeats and setbacks, they enjoyed partial victories that only diminished the threats, and they witnessed the worst of the McGuinty-Wynne governments’ push for wind power at all costs, as decisions were made behind closed doors. At times, it seemed all common sense and decency had been lost.
Naturalist organizations protested the harm to wildlife. Even a former senior Liberal government Cabinet minister came out swinging against the White Pines project, to no avail.
Finally, victory.
Our congratulations and best wishes to the people of “The County”.
And now, there is more work to be done.
All the things the people in Prince Edward County fought against — harm to the ecosystem, death and destruction (including possible extinction) of wildlife, damage to water and the water table, and finally, via the unique noise emissions from wind turbines, harm to people — all these things are going on across Ontario right now.
While it is a source of hope that the Green Energy Act will be gone, the fact remains that there is a lot of damage to repair. First, the noise emissions, including low-frequency noise, must be dealt with. There are literally thousands of formal reports of excessive noise, a significant proportion of which also carry reports of “adverse  effects” including health problems, often linked to sleep disturbance.
These must be addressed and resolved, immediately.
Water wells and the damage done to them by vibration from construction and wind turbine operation (think of them as giant tuning forks stuck in the ground) is another problem. In Chatham-Kent, dozens of families have no water at all, or their water is so contaminated by particles it is unusable. The new government has promised an investigation and resolution–this also must happen immediately.
While the government has taken steps to ensure that no new power projects bringing intermittent power, produced out of phase with demand, will be proposed, the fact is, there are still several in process, which will further the environmental damage and add to consumers’ power bills. Cancelling the Nation Rise and Romney projects could save Ontario as much as $700 million. For Nation Rise, which received a conditions-laden approval days before the writ was drawn up for the June election, it is a simple matter of revoking that approval. (The community concerns about water, noise and safety are valid, so much so that the power developer  changed material parts of the project during the ongoing appeal.)
More work to be done.
contact@windconcernsontario.ca