Ontario rural residents caught on a ‘hamster wheel’ of emails and phone calls to government, and endless testing for wind turbine noise — but nothing ever gets done 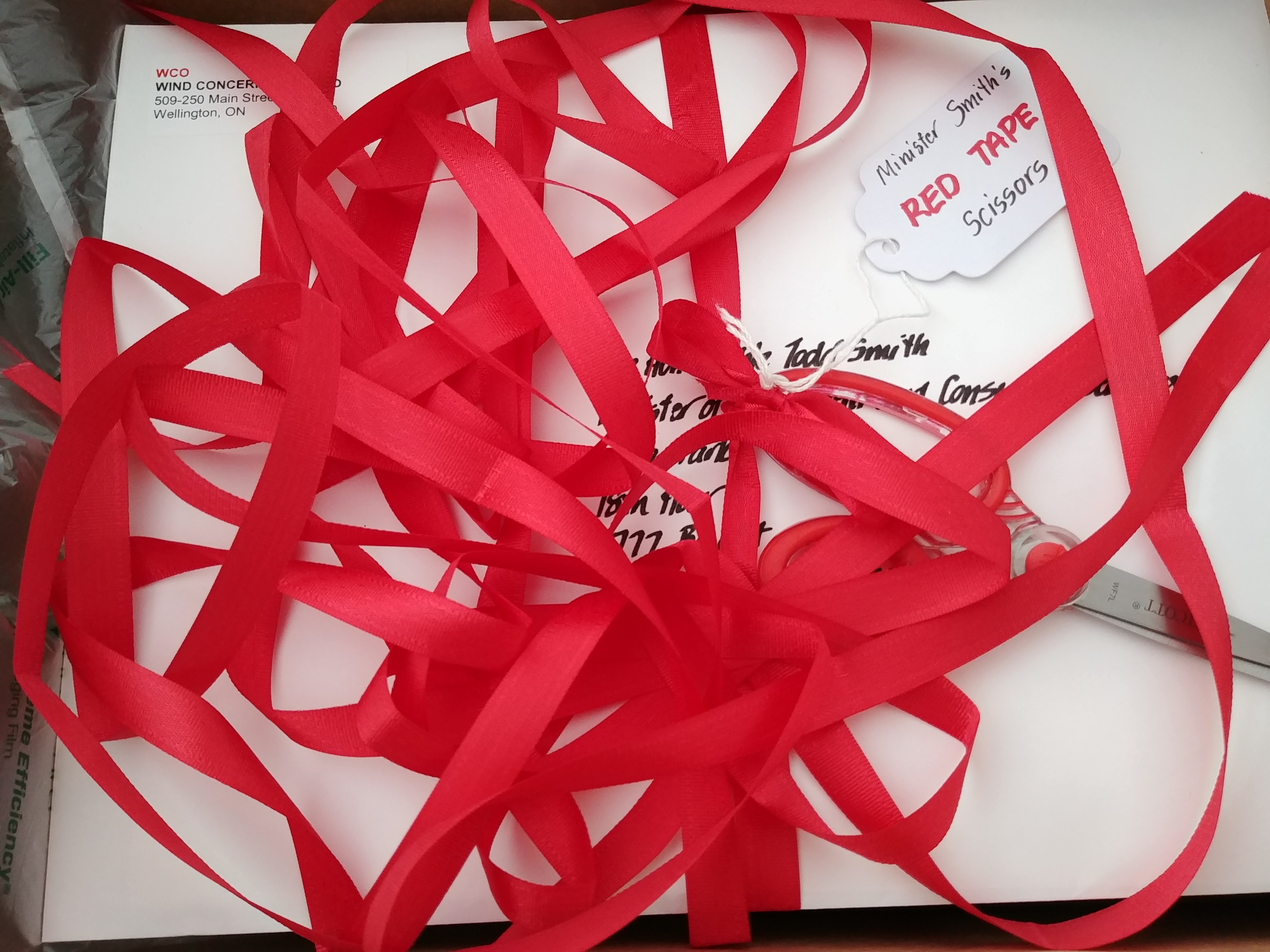 February 18, 2019
One of the cost-cutting initiatives of the now eight-month-old Ontario government is the “Red Tape Reduction” plan, spearheaded by Government and Consumer Services Minister Todd Smith.
Last week, Wind Concerns Ontario wrote to Minister Smith (who is also the MPP for Prince Edward County where citizens have been fighting wind power projects for over 10 years) to suggest that reviewing to wind turbine noise compliance protocol and actually enforcing Ontario’s noise regulations could go a long way to cutting “red tape.”
“The Compliance Protocol for Wind Turbine Noise is a costly and ineffective process,” Wind Concerns Ontario president Jane Wilson wrote in a letter that accompanied a box of printouts of noise complaints and Master Incident Report summaries that are government records collected since 2006. “Rather than requiring the project operators to address complaints to the satisfaction of local residents, the focus of enforcement has shifted to proving compliance with audible noise levels using this protocol. While the original Ministry compliance actions were focused on the actual complaints about the project, the new compliance process has no direct connection to the complaints registered with the Ministry about the turbine operations.”
“That is complex and costly for both the government and the power operators,” Wilson said.
This process is incredibly problematic, Wind Concerns Ontario asserts: staff time is being used to receive and respond to complaints coming in to the Ministry via its complaints tracking process (the Spills Action Centre and District Offices), staff is involved in liaising with wind power operators over the audit process, and now, an enormous backlog of long overdue audit reports is also being dealt with by staff. And meanwhile, complaints about the adverse effects created by wind turbine projects are not being resolved.
“This is the very definition of inefficiency,” Wilson said.
In one example provided to the MInister, a family in the Windsor area has been complaining about wind turbine noise and adverse health effects for more than eight years. According to documents received via Freedom of Information request, in one year the family had more than 50 interactions with government staff, staff with staff, and staff with the power operator. Ministry staff made two site visits with no action taken. Meanwhile, one member of the family visited the family’s doctor multiple times and underwent diagnostic testing including MRIs and acoustic testing, all of which place a burden on Ontario’s healthcare system.
“The fact is, the government and the power operators are relying on this protocol instead of listening to resident’s actual complaints, some of which clearly indicate the presence of other than audible noise. These complaints need to be addressed, the noise emissions need to stop, and the enormous cost to the people of Ontario can be identified,” said Wilson.
contact@windconcernsontario.ca