September 30, 2019
When the Ontario government under premier Dalton McGuinty introduced the Green Energy and Green Economy Act in 2009, the premier promised that regulations for setbacks between the industrial-scale wind turbines and Ontario residents’ homes would be based on science, for health and safety.
“If you have concerns [about health and safety],” he said, “ we must find a way to address those.”[1]
So, promises of protection were made to the people of rural Ontario, who were without recourse as their quiet communities were transformed into power generation facilities.
But there was little or no protection.
Information provided to Wind Concerns Ontario by the Ministry of Environment, Conservation and Parks shows that lengthy periods, sometimes years, elapsed between the submission, review and acceptance of technical reports required to confirm that turbines were safe. The majority are still either not complete or in review.
Meanwhile, citizen complaints of excessive noise, many with reports of adverse health effects linked to sleep disturbance, continue. Thousands of complaints have been registered with the government, most without resolution.[2]
Regulations exist but checking for compliance involves comparing real noise measurements via “audits” (done by the wind power operators themselves, using acoustics contractors) against their own “modelled” or predicted noise levels.[3]
According to the information provided by Eugene Macchione, Acting Director Client Services and Permissions Branch of the environment ministry in an email dated August 9 this year, of the 49 wind power projects listed in response to our request under Freedom of Information legislation:

These figures mean that, according to the environment ministry’s list, Conservation and Parks, almost 70 percent of the audits required to assure health and safety are either not complete as submitted, are in review, not compliant, or not submitted at all.
The list is not complete and is missing 11 post-Green Energy Act projects; more projects, at least 19, are also not listed.

WIND POWER PROJECT AUDIT STATUS AS OF JULY 30, 2019, FROM MINISTRY OF ENVIRONMENT, CONSERVATION AND PARKS

Not only are the required audit reports not completed, the time elapsed between submission of the audits and conclusion of the government review is astonishing. The Conestogo wind power project began commercial operation on December 20, 2012, and is listed as still being “in review” as of July 30 for 2,058 days — that’s over five and a half years. According to noise report data provided to Wind Concerns Ontario via FOI, Conestogo has been the subject of dozens of noise complaints from nearby residents.
East Durham Wind Energy Centre began commercial operation in 2015, but after 1,087 days, it is now listed as incomplete; the project racked up almost 300 formal noise complaints in just a year and a half.
The Summerhaven power project has been operating since August 2013, and remains “in review” after more than 2,000 days, or 5.4 years.
The list provided by the ministry is not only incomplete, however, it is inaccurate: the K2 Wind power project, which is number three in Ontario for noise complaints as of 2016 (it started operation in 2015) is listed as “incomplete” when in fact, the project was found to be out of compliance with more than 80 of its 140 turbines not meeting the regulations. The project is currently under a Director’s Order to implement a noise abatement plan.[4]
Bluewater is one project that was determined to be “in compliance” (despite many noise complaints against it), but its audit report was in review for four years.
The single wind turbine owned by union Unifor is not named on the government list but was the subject of over 300 complaints by the end of 2016, with many more reported in the media. Meeting recently with environment minister Jeff Yurek, residents of Port Elgin told him that audits were never done for the turbine, in spite of hundreds of complaints, many with reports of adverse health effects. [5] 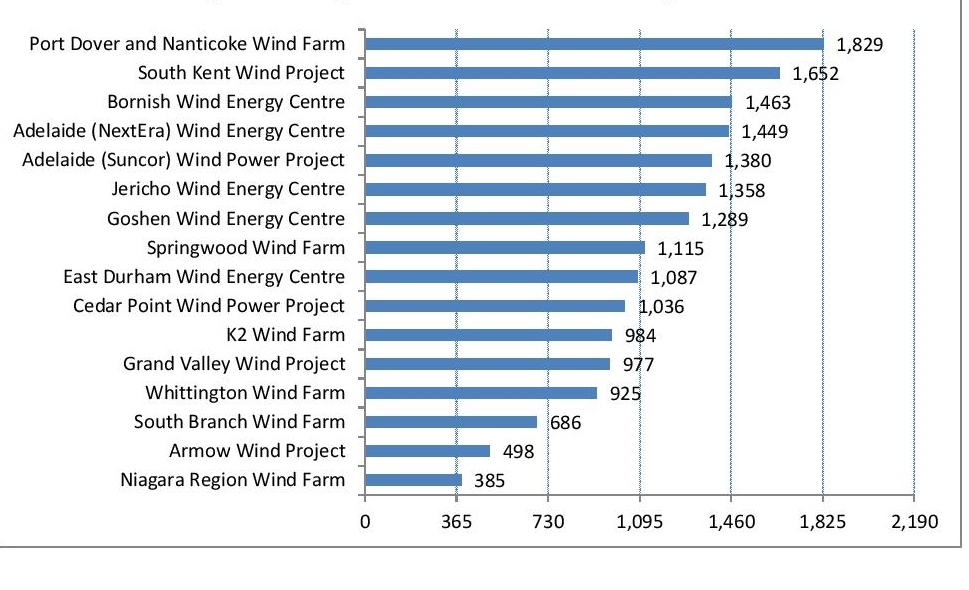 Source: Ontario Ministry of Environment, Conservation and Parks, August 9, 2019
The new government seems to be actively demanding audits be done, and several Ontario projects are now under order to reduce noise, but a lot of people have been waiting a long time for these reviews, says Wind Concerns Ontario president Jane Wilson.
In April 2017, MPP Lisa Thompson asked a question in the Ontario Legislature regarding resolution of complaints about wind turbine noise emissions experienced by two families in her riding of Huron-Bruce. Then Minister of the Environment and Climate Change in the Wynne government Glen Murray assured members of the Legislature that:

The … law works. There are standards. When people call, I’m very proud of the officials. They respond quickly and they enforce the law. The law is being enforced here. If wind turbines or any other type of technology exceeds sound levels, we enforce the law. … No one should have to suffer noise or noise pollution from any source, and certainly not wind turbines in their community.[6]

“People were promised—and they are still being told by environment staff, every day—that the rules are there to protect them,” Wilson says. “But here’s the truth: the rules may be there but they’re not adequate, and they haven’t been enforced. The previous government appears to have been very protective of the wind power business.”
The Ministry has multiple options to force wind power operators to comply with regulations, including shutdown. (See Sections E1 and E3 of the Compliance Protocol). The project operators are required to post the submitted audits publicly, but there is a serious inconsistency in this. The Compliance Protocol on the ministry website appears to have been edited and is now contradictory.[7] As of September 24, 2019, the protocol (with the apparent cut-and-paste errors) reads:

The larger issue is the fact the Compliance Protocol is flawed: it is based on audible noise and does not take into account the full range of noise emissions from wind turbines. Low-frequency inaudible emissions are implicated in many adverse health effects, but were not included in the regulations which were themselves formulated with guidance from the wind power lobby.
“While the current government seems to be committed to enforcing the noise regulations for wind power generators, there is a long way to go before the people of rural Ontario are protected,” says Wilson.
© WIND CONCERNS ONTARIO
contact@windconcernsontario.ca
Read the MECP document here: I and E Audits July 30 2019 – (Aug 9 2019) (1)
NOTE: data on noise reports filed with the Government of Ontario are only available at present for 2006–2016; requests have been made for 2017 and 2018 data, but have not been fulfilled. WCO recently applied for a second appeal with the Information and Privacy Commissioner’s Office for refusal to reply to the 2017 data request.
[1] Toronto Star, February 11, 2009. “McGuinty vows to stop wind farm NIMBYs.” Available at: https://www.thestar.com/news/ontario/2009/02/11/mcguinty_vows_to_stop_windfarm_nimbys.html
[2] Wind Concerns Ontario. Response to Wind Turbine Noise Complaints, 2nd report 2015-2016, February 2018.
[3] According to the Compliance Protocol for Wind Turbine Noise two kinds of audits are required as part of their Renewable Energy Approval, and to comply with Ontario regulations. They are: E-Audits to verify the validity of the sound power levels provided by manufacturers, and used in acoustic models to determine the noise impact of a wind facility at receptor locations; and I-Audits to verify the validity of predicted sound pressure levels in Acoustic Assessment Reports, and verify compliance with applicable sound level limits at receptor locations.

Electricity costs up 97 percent in ...