“Like a death”: new research explores why some wind turbine neighbours were forced to leave their homes 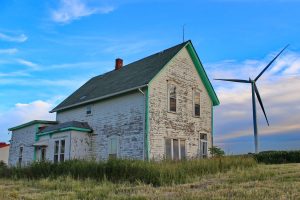 New research catalogues the reasons behind families in Ontario who decided to abandon their homes after wind turbines started up.

June 29, 2020
“I couldn’t sleep anymore”
“Nowhere to go, no hiding from it [the noise]”
“We had beautiful water–you couldn’t drink it afterwards [turbines began operation]”
“I asked my doctor [if my health problems could be” about [wind] turbines. She said, ‘Yes’.”
Those are just a few of the comments made by Ontario residents who participated in a special study done by a team of health care professionals, acoustics specialists and investigators. A new paper by Dr. Robert McMurtry, Carmen Krogh, acoustics specialists Robert Rand, Jerry Punch, Stephen Ambrose and others*, reviews the reasons behind the desperate choice made by dozens of Ontario families to leave their homes, to preserve their health–both mental and physical.
The new paper, published last week, is based on a study carried out over three years involving 67 Ontario residents and additional family members for a total of 165 people. They all lived within 10 km of industrial-scale wind turbines or wind power generators.
More than half reported adverse health effects after being exposed to noise emissions and vibration from operating wind turbines; stray voltage and disturbed water wells were also cited as key factors in decisions to leave the houses. The people participating in the study had lived in their houses for a mean period of 20 years, or a range of three to 66 years.
The aim of the paper is to present policy-makers with information on the “potential outcomes of placing wind turbines near family homes,” the authors state in their conclusion.
“The comments made by the people in this study are just heart-breaking,” said Wind Concerns Ontario president Jane Wilson. “We’ve seen them over and over in the Incident Reports we received from Freedom of Information requests, together with statements from people indicating they can’t put up with the turbines and the adverse effects anymore. It is well past time the government enforced the rules, changed the rules, and developed rules that truly protect the people of Ontario.
“Bravo to this study team, and all the work they’ve done to expose the terrible things that have happened to innocent citizens.”
Read the full paper here: https://m.scirp.org/papers/101098?fbclid=IwAR3XcUKEebiBR-sLAyIEbNpGHnP3-EQU3_hwtOx4_ovfW6f-cI6JQj7Igfc

*Other authors include community group leaders such as Anne Dumbrille (CCSAGE), Linda Rogers (Mothers Against Wind Turbines) and Debra Hughes.