The Ontario government has posted a notice on the Environmental Registry that it plans to make the Alfred Bog a “non-operating provincial park.”

That means, there site will be protected but not offer any services beyond perhaps a boardwalk or other features, and no fees would be charged for using the park.

The bog is a “domed” peat bog and is located 70 km east of Ottawa. According to the environment ministry, the Alfred Bog is one of three such bogs in Ontario, and is the largest one. It is home to many species of wildlife as well, including the black-backed woodpecker and the sandhill crane.

Wind turbines almost made it

The Alfred Bog was also almost dangerously close to the location for a wind power project in Eastern Ontario. The “Eastern Fields” project was developed by RES Canada, a huge energy consortium headquartered in the U.K.

Citizens of St. Bernardin objected to the project based on the potential for environmental harm, and safety issues—turbines would be too close to roadways, they said, and much of the project area had features of marine or Leda clay, which is unstable.

“The construction of turbines for the St.Isidore Wind Energy Centre and the Eastern Fields Wind Farm, as well as their access roads and transmission lines, would have had detrimental effects to the bog,” says Julie Leroux, Chairperson for community group Save The Nation.

“We strongly opposed both projects based on environmental harm.”

The Ford government halted approvals on several renewable energy projects in 2018, including Eastern Fields. The project had a contract with the Independent Electricity System Operator for several years after; that was eventually terminated as well. 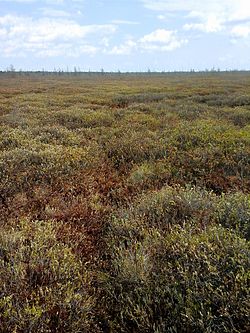 The Alfred Bog: fragile landscape once in danger of being near a wind farm

The habitat must be protected: community group

The group is heartened by the news that the Ford government is now taking steps to protect the area.

“We support the proposal of protecting the Alfred Bog through the creation of a Provincial Park,” says Julie Leroux.

“It is the largest peat bog in southern Ontario, and one of only three raised peat bogs remaining in the southern half of Ontario. The Alfred Bog habitat is home to rare plants and species that must be protected.”

In its announcement, the environment ministry makes the following statements about the Alfred Bog.

“Ontario is committed to working with leaders in land and water conservation, like the Nature Conservancy of Canada (NCC), to preserve areas of significant environmental and ecological importance across the province.

To support this commitment, we are proposing to create Alfred Bog Provincial Park, a natural environment class park. The approximately 3067-hectare area is 20 km southwest of Hawkesbury and 70 km east of Ottawa (see map in the Supporting materials section).

The Alfred Bog site is:

The proposed provincial park includes a combination of lands privately owned by the Nature Conservancy of Canada and lands managed by the Ministry of Natural Resources and Forestry under the Public Lands Act. The lands have been purchased over the past several decades to create Alfred Bog Provincial Park.

The protection of the Alfred Bog is possible because of the support of partners, such as the NCC and the local municipality.

With that said, we would ensure long-term protection of biodiversity in this important and sensitive wetland while continuing to provide recreational opportunities for the public, including walking on the Bog Walk Trail, hunting and birdwatching.”

The government proposal is open for comment on the Environmental Registry.

Save The Nation/Sauvons La Nation is a community member of the Wind Concerns Ontario coalition.

Electricity costs up 97 percent in ...