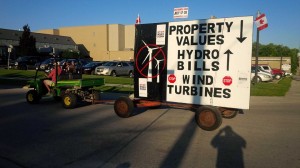 September 1, 2014, Toronto— Ontario’s new Large Renewable Procurement process aims to add more expensive, intermittent wind power to Ontario’s power capacity at a time when Ontario doesn’t need the power, and can’t afford new generation, says Wind Concerns Ontario.
In comments made to the Ontario Power Authority on the draft new procurement process for “renewables” such as wind and solar, the advocacy organization said it cannot understand why suppliers for more power are being sought at this time.
“Ontario lost more than $1.5 billion last year because we had power being produced at the wrong time of day for people to use it,” says president Jane Wilson. “We had to sell it off to other jurisdictions like neighbouring U.S. States at bargain-basement prices. And now, we ‘re looking for more? It doesn’t make sense.”
Adding more renewables to the mix will increase electricity bills for Ontario’s already strapped consumers. “I am very concerned about energy poverty,” Wilson, a registered nurse, says. “We are hearing from young people and seniors who say they have reached or exceeded their limits and just can’t pay any more. Why is Ontario scaling back on cheap hydro power, and looking to buy more expensive wind?”
Wind Concerns Ontario also noted concerns about the approval process for wind power projects. At present 85 municipalities in Ontario have declared themselves to be unwilling hosts to the wind power plants, which can reduce property values, diminish attractiveness for tourists, and produce noise and vibration that disturbs sleep and affects health for some residents. Seven projects have been approved since the June election, Wind Concerns says. The cost of those projects works out to $135.7 million a year or $2.7 billion over the life of the 20 year contracts, or an additional $28.28 per household every year.
“Kathleen Wynne, Bob Chiarelli and their government keep saying that they are not going to ‘force’ wind power projects on communities,” Wilson says, “but just last week they approved a huge power project at Plympton-Wyoming in Lambton County—that community has been very clear about its wishes. This new process fails to define what community approval means. Our communities need to know that, now.”
Wind Concerns commented on other issues with the Ontario Power Authority such as a need for power developer to disclose all the impacts of a proposed project to local governments, for their sales staff to adhere to a code of practice, and for wind power contracts to contain measures that allow landowners to change their minds about having turbines on their property.

Wind Concerns Ontario is a coalition of community groups and individuals concerned about the potential impact of large-scale wind power generation projects on the economy, on the natural environment and wildlife, and on human health.
Read the full Wind Concerns Ontario comment to the Ontario Power Authority on the new Large Renewable Procurement process here: Aug23Input into Large Renewable Procurement RFP Framework
wco.president@gmail.com